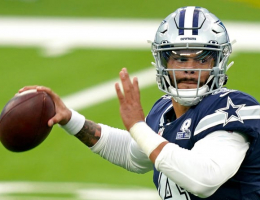 Troy Aikman, of all people, understands the value of a highly drafted quarterback to a franchise eager to contend for a Super Bowl.

But as the 2-7 Cowboys pace toward a high 2021 draft selection, Aikman doesn’t believe the franchise should focus on positioning itself to draft top gun-slinging prospects like Clemson's Trevor Lawrence or Ohio State's Justin Fields.

“You coach to win, that’s the objective,” Aikman told USA TODAY Sports on Tuesday. “I think all those things kind of work itself out. The Cowboys aren’t in need of a quarterback. I can see where maybe some teams might look at it as, ‘Trevor Lawrence is sitting out there, we’d sure like a shot at him.’

“But I don’t think Dallas is in the market for his services.”

Cowboys executive vice president Stephen Jones said Monday the team is “so fired up about [Prescott] leading us in the future.”

Owner Jerry Jones doubled down on that Tuesday morning when asked if the team would be crazy to consider a quarterback with a first-round pick.

“Yes,” Jones said Tuesday morning on Dallas radio station 105.3 The Fan. “You’re asking me is it crazy to bring the idea up and I’m answering: Yes.”

“We’re playing games here guys, but it’s not the thing to be talking about here at all. You know, Dak is our quarterback.”

Prescott was leading the league in passing with 1,856 yards before suffering a season-ending ankle injury in Week 5 against the New York Giants.

Aikman compared the Cowboys eyeing top quarterback prospects to the Green Bay Packers, who drafted Jordan Love with the 26th overall selection of the 2020 NFL draft despite Aaron Rodgers leading the club to the NFC championship game three months earlier.

“I think you take the best player available,” Aikman said, while speaking in conjunction with Avocados From Mexico’s “Make The Big Game Your Bowl Game” Super Bowl campaign. “But if you’ve got a quarterback, if you’ve got a franchise quarterback, I think there’s plenty of other needs for this team.

“The Packers had a lot of needs last year and they drafted Jordan Love in the first round. We’ll see how that works out, but it doesn’t appear to me that Aaron Rodgers is going to be done playing any time soon at a high level. So I don’t know how much the Packers are going to reap from that pick.”

The Packers sit atop the NFC North at 6-2, Rodgers has completed 67.5% of passes for a whopping 24 touchdowns to just two interceptions with a 117.5 rating.

Unlike Rodgers, whose contract runs through 2023 with cap hits of $31.6 and $17.2 million scheduled for the next two seasons, Prescott is not under contract with the Cowboys after 2020. The Cowboys and Prescott failed to agree on a long-term deal each of the last two offseasons, Prescott playing out his rookie contract in 2019 then signing a franchise-tag tender of $31.4 million for 2020. A second tag in 2021 would cost the Cowboys $37.7 million even as the salary cap is expected to shrink due to COVID-19 limitations. The two sides can’t officially resume negotiations until after the season.

Prescott’s health will factor into his long-term future in Dallas. He hadn’t missed a start before his injury, suffered when a designed run went awry. Prescott was carted off the field in tears and transported immediately to a local hospital for surgery to repair a compound fracture and ankle dislocation. Stephen Jones said Monday that Prescott is ahead of schedule for his four-month recovery timeline and has avoided any setbacks.

Prescott is one of six Cowboys starters sidelined for the season with injury, with more than a dozen additional players missing shorter periods of time due to injury in head coach Mike McCarthy’s first year. The Cowboys have started four quarterbacks in the last five games as Andy Dalton, Prescott’s backup, suffered a concussion and then landed on the reserve/COVID-19 list. Dalton is expected to regain his starting role once healthy.

Aikman, whose Avocados From Mexico campaign will feature personalized fan messages and in-store engagement, said Garrett Gilbert’s performance in a 24-19 loss to the undefeated Pittsburgh Steelers impressed him. Aikman said Gilbert’s ability to perform with limited reps highlighted his aptitude to be a serviceable backup in the league, whether with the 2021 Cowboys or elsewhere. But at starter, Aikman counts himself among those rooting for Prescott to land a long-term deal in Dallas.

“I’m a huge fan, as you know,” Aikman said. “I think the guy’s a wonderful individual, a great leader, a great teammate. I mean, everything that you want. And he’ll get his money. He got money this year, that’s nothing to be upset about. But his big payday, multi-year contract is coming.

“And I’ll be the happiest person around for him.”