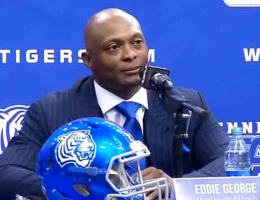 University president Glenda Glover: ‘We were not looking for a cookie-cutter solution’ to bring back

“I’m uncomfortable, but I’m comfortable being uncomfortable,” George told The Undefeated. “… Everything that I’ve done in my life has prepared me for this moment. This is going to stretch me. There are some things I don’t know, but it’s my job to bring the people in the room who do know.

“I’m a decision-maker, I’m not a playcaller. I can develop into one. I do know what a winning product looks like on the inside of the locker room.”

George, a self-described entertainer, educator and entrepreneur, is the unlikeliest of FCS college football coaches.

That’s because Tennessee State president Glenda Glover didn’t want to hire yet another recycled coach. Nor did she want to make a traditional hire.

She wanted a coach who would excite alums, shake up the program and bring Tennessee State attention. So did athletic director Mikki Allen.

“We were not looking for a cookie-cutter solution to our goal of putting winning back into our football program,” Glover said. “We wanted to think outside the box. He’s a winner and we were looking for a winner.”

Having a coach with no experience didn’t bother Glover because she had never been a university president until Tennessee State hired her, and Allen had never been an athletic director until Glover hired him.

“I knew it would be a game-changer for HBCUs [historically Black colleges and universities] and the type of people we attract,” Glover said. “I knew a winner is a winner and a winner will find a way to win.”

Now, they simply needed to convince George to accept the position

“I knew it would be a game-changer for HBCUs and the type of people we attract.

I knew a winner is a winner and a winner will find a way to win.”

“When I was presented with this opportunity a few weeks ago, I was speechless. I was floored. And I was like, ‘No,’ at the beginning,” George said. “But I had some excitement about it. I thought it would be pretty cool to be a head coach.

“I’ve seen what Deion [Sanders] has done at Jackson State and the energy he created.”

He talked to Sanders about putting a staff together and assembling the resources to make sure every aspect of the program from the locker room to the training room is done at a high level.

As he tried to figure out whether taking the job made sense, George leaned on his vast list of contacts for advice.

Former Houston Oilers and Titans coach Jeff Fisher, who selected George with the 14th pick of the 1996 draft, told George he’d be perfect for the job. Fisher has been mentioned as a possible coaching hire for the Tigers.

As he does with many of his life-changing decisions, George wrote down pros and cons. He consulted with his pastor and prayed for wisdom and guidance.

Then he waited for his spirit to lead him in a certain direction.

“I had to ask myself if I had the energy, the focus and the commitment to do it,” said George, who still lives in Nashville, where Tennessee State is located, with his wife and two sons. “I had to be honest with myself. Can I do this? Am I passionate about the opportunity? Yes. Do I have the skill set to get it done? Yes. Do I have to move? No.

“When I got focused and locked in, I said, ‘This is not about me, it’s about something bigger than me.’ Leadership and being a head coach is about service. It’s about serving others.”

But it’s also about winning games and, ultimately, championships for the school that produced legendary coach John Merritt and Pro Football Hall of Fame players Claude Humphrey and Richard Dent.

Former coach Rod Reed had four winning seasons in 11 years but hadn’t won more than seven games since winning 10 in 2013, when the Tigers advanced to the second round of the FCS playoffs. The Tigers play in the highly competitive Ohio Valley Conference.

There will be a steep learning curve for George, who must assemble a staff, become familiar with NCAA compliance rules, change the program’s culture and learn how to put an offseason practice schedule together.

But he can’t wait to get started.