Former Florida State and Hampton University quarterback Deondre Francois is no stranger to setbacks. He was invited to an NFL-sponsored combine for athletes from historically Black colleges and universities (HBCUs) last year, but because of COVID-19, the combine was canceled.

“Missing out on the first HBCU combine was a letdown,” said Francois, “because many guys like myself have prepared our whole lives just for the opportunity to prove to scouts that we are the real deal.”

A new combine for HBCU players was held earlier this month. Out of the 42 players invited to attend the two-day event at the University of Alabama-Birmingham, 26 were selected by NFL teams and scouts because they missed out on their chance last year. Francois was one of them.

“The two-day workout went by quicker than I thought it would,” said Francois. “I was glad to see the other invitees get their chance to perform, and I know they were grateful for the opportunity. We all needed this chance again badly after missing out, and coming back a year later was an overall blessing.” 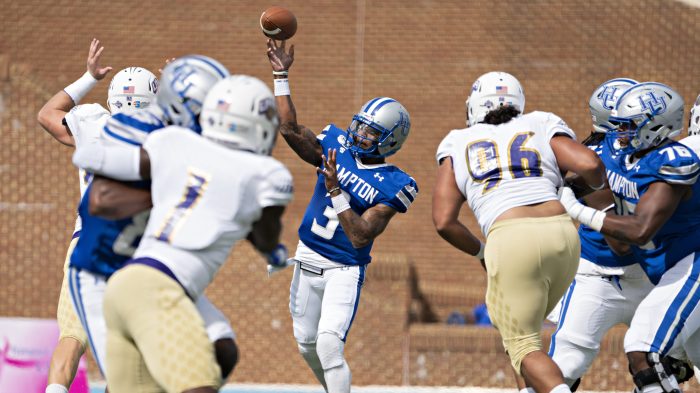 Francois, a 6-foot-2, 220-pound quarterback, said HBCU combines would be great for aspiring football players to get a viable audition for the NFL. “I’m not sure if the combine alone will be enough to push more athletes to HBCUs, but it will help all athletes see that it doesn’t matter where you go to school. As long as you perform, the scouts will find you.”

In his only season at Hampton, Francois threw for more than 2,500 yards and 26 touchdowns. His completions and touchdowns broke school single-season records and he was invited to the College Gridiron Showcase and Hula Bowl for college seniors.

He signed with the Atlanta Falcons after the 2020 NFL draft, but didn’t make the team.

Before his arrival at Hampton, Francois was a four-star recruit for Florida State, where as a freshman in 2016, he led the Seminoles to a 10-3 season and an Orange Bowl win over Michigan.

Off-the-field setbacks caused him to leave Florida State. In April 2018, police seized 17 grams of marijuana during a raid of his apartment after a tip from a man who had been in Francois’ home. He was charged with misdemeanor possession but wasn’t arrested. After he completed a pretrial diversion program, the charges were dropped.

He was later dismissed from the team after a domestic assault accusation by a former girlfriend, which was later proven to be false.

Yet, he remained focused on making it to the NFL. So, amid the uncertainty of the pandemic, a new opportunity arose in the Fan Controlled Football League, which gave athletes the opportunity to be a part of something new to catch the eye of professional football scouts.

Fan Controlled Football was a six-week, 7-on-7 indoor league with four teams competing at a blistering pace in what seemed like backyard Arena football. More than an offseason appetizer for football fans, it was a platform for quarterbacks, wide receivers and running backs to display their skills. This league had former NFL players, free agents and top NCAA Division I and Division II footballers.

As the quarterback for the Glacier Boyz, Francois led all quarterbacks with 11 touchdowns and more than 300 yards on the league’s smaller-than-conventional football fields. And Francois played well in the championship game in which the Glacier Boyz lost to the Wild Aces 46-40.

NFL veteran Richard Sherman, a co-owner of the Glacier Boyz along with the Migos’ Quavo and two others, said that Francois was the reason the Glacier Boyz made it to the title game and he initially wanted to select Francois as the first franchise-tag player for the team.

“He’s the reason why we’re here, the poise, the tenacity, and what’s crazy is, we were talking about the potential for the very first franchise tag, and Quavo really wanted [David] Pindell, and I really wanted Francois,” said Sherman. “I’m thankful we were able to get him later on [in the season] and he’s been everything we wanted him to be.”

As he awaits the NFL draft from April 29 to May 1, Francois has been staying focused and remaining in shape, which is no easy task. He trains with fitness coach Tom Shaw in Daytona Beach, Florida. Shaw, who has 14 years of NFL coaching experience, has worked with more than 140 first-round picks.

“I’ve been looking forward to playing professionally all my life. We’ll see the way the chips fall in the draft, but hopefully, I’ll get a call for an opportunity with a team, or maybe a camp invite,” said Francois. “If Canada calls, I’ll definitely pick up the phone. I’m open to any opportunity that will give me the chance to play the game I love.”