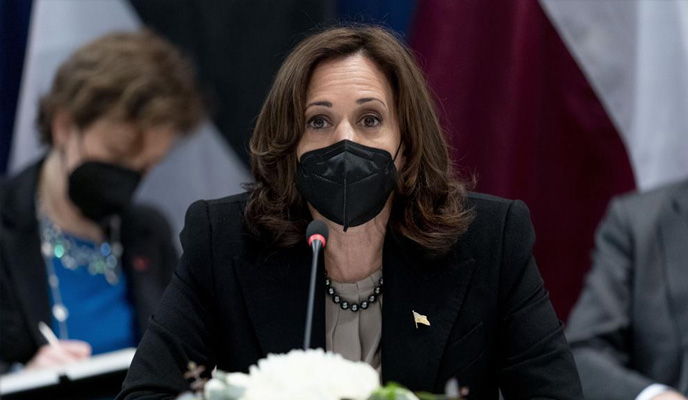 MUNICH  — Vice President Kamala Harris was expected to use a highly anticipated speech at the Munich Security Conference on Saturday to warn Russia that it will face huge financial costs if it further invades Ukraine, while underscoring that an invasion will only draw European allies closer to the United States.

Her address at the annual conference comes one day after President Joe Biden said he’s “convinced” that Russian President Vladimir Putin has made the decision to invade.

The vice president aimed to make the case to a largely European audience that the West has “strength through unity” and that an invasion would likely lead to an even bigger NATO footprint on Russia’s doorsteps, according to a senior administration official who briefed reporters on Harris’ diplomatic efforts in Munich and spoke on the condition of anonymity.

Harris on Friday declared “our greatest strength is our unity” as she met with the leaders of Estonia, Latvia and Lithuania on the sidelines of the conference. The Baltic countries have requested the U.S. increase its troop presence on the eastern edge of NATO. “This is a moment that has made that clear: that our unity is evidence and is a measure of our strength.”

In addition to talking to European allies and Americans at home, Harris has a message intended for Putin: Step back from the precipice of war or suffer the most severe sanctions ever levied against Russia. But as the brewing crisis gets more complicated by the day, Biden and other administration officials have offered increasingly dire warnings that the window for diplomacy is narrow.

Biden on Friday told reporters he believes Putin has decided to invade in the coming days, taking military action that could go far beyond the disputed Donbas region and include the capital of Kyiv.

As Harris makes a late-inning push to Putin to pull back, she aimed to hit hard on the argument that the U.S. will emerge stronger from a conflict while Russia will emerge weaker, the Biden administration official said.

Ahead of the speech, Harris sought to rally allies.

In addition to her meeting with the Baltic leaders, the vice president on Friday met with NATO Secretary General Jens Stoltenberg, briefed a bipartisan group of U.S. lawmakers attending the conference about the rapidly changing situation, and consulted with Secretary of State Antony Blinken, who was also in Munich.

Harris was scheduled to meet after her speech on Saturday with German Chancellor Olaf Scholz and Ukraine President Volodymyr Zelenskyy.

Biden demurred when asked on Friday about the wisdom of Zelenskyy leaving Ukraine to attend the Munich conference at a moment when the Biden administration warns an invasion could be coming any day.

“That’s a judgment for him to make,” Biden said of Zelenskyy.

The Munich gathering has been used in recent years by both U.S. and Russian leaders to deliver pivotal messages before an important audience.

At last year’s conference, held virtually due to the coronavirus pandemic, new president Biden declared “America’s back” in an address that touched on economic and security concerns driven by adversaries Russia and China.

Fifteen years ago, Putin used his own Munich appearance to deliver a broadside against NATO, accusing the alliance of putting “its frontline forces on our borders.” It’s a message that Putin continues to press as he’s encircled Ukraine with Russian forces as he demands the U.S. and other NATO nations guarantee that Ukraine — long aspiring to be included in the alliance — will never be given entry.

“Putin is a bully who responds to strength. Sending VP Harris to Europe for meetings and speeches will only amuse him,” tweeted Nikki Haley, who served as Trump’s U.N. ambassador and is a potential 2024 presidential contender.

Ahead of the speech, Harris seemed clear-eyed about her assignment to rally allies.

“We understand this is a dynamic moment in time,” Harris said during her talks with Stoltenberg. “The work we are doing on a daily basis and sometimes on an hourly basis to strengthen the relationship, to check in, in terms of our strategic imperative, is critically important and it’s one of the reasons I’m here.” 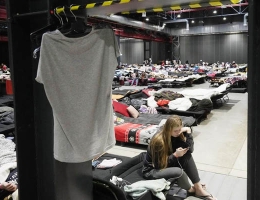 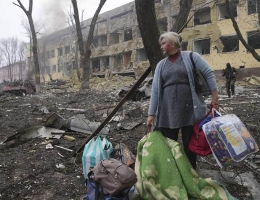 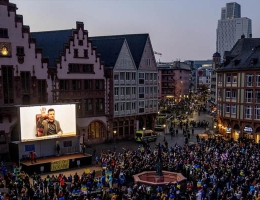 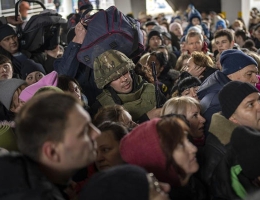 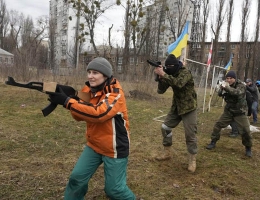 Ukraine’s Zelenskyy calls on Putin to meet as tensions soar