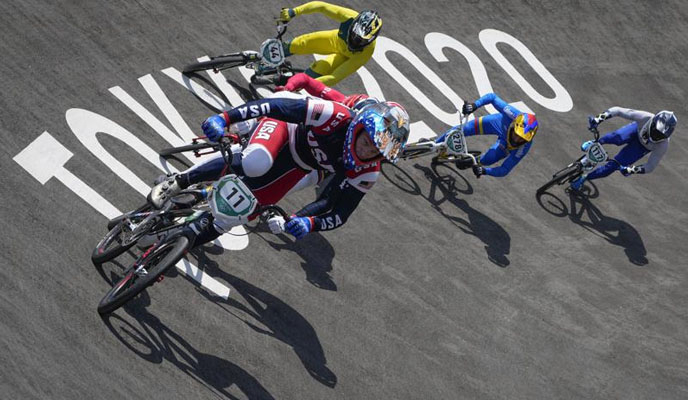 TOKYO — The Latest on the Tokyo Olympics, which are taking place under heavy restrictions after a year’s delay because of the coronavirus pandemic:

Reigning BMX racing gold medalist Connor Fields of the United States has been carried off on a stretcher after crashing in the third qualifying heat at the Tokyo Olympics.

Fields was fourth after his opening two heats and landed hard off a jump heading into the first turn in the second heat. The 28-year-old from Las Vegas slammed into the turn and lay on the track as medical personnel rushed out to help him.

Fields was attended to for several minutes before being carried away. He qualified for the finals, but will not be able to race.

He became the first American BMX rider to win gold at the 2016 Rio Games and was a favorite to win it again in Tokyo.

China’s Wang Shun has captured gold in the men’s 200-meter individual medley at the Tokyo Olympics.

It was another disappointment for hometown star Daiya Seto, who didn’t even qualify for the final of his first two events. He finally got through in the 200 IM but missed out on a medal with a fourth-place finish — a mere five-hundredths of a second behind the Swiss bronze medalist.

American Michael Andrew led after the third leg, powering to the top spot on the breaststroke. He faded badly on the freestyle to wind up in fifth, more than two seconds behind the winner.

Emma McKeon has earned another gold medal for the Australian women at the Olympic pool.

McKeon touched first in the 100-meter freestyle with an Olympic-record time of 51.96 seconds, becoming only the second woman to break 52 seconds in the sprint.

Hong Kong’s Siobhan Haughey claimed the silver in 52.27, while Aussie Cate Campbell took the bronze in 52.52. American Abbey Weitzeil was last in the eight-woman field.

The Australians have won four individual women’s events at the Tokyo Aquatics Centre, in addition to setting a world record in a 4x100 free relay that included both McKeon and Campbell.

Russia’s Evgeny Rylov has completed a backstroke sweep at the Tokyo Olympics.

Rylov added the 200-meter backstroke title to his victory in the 100 back, winning with an Olympic-record time of 1 minute, 53.29 seconds.

Murphy was a double-gold medalist at the 2016 Rio Games, extending America’s dominance of the backstroke events that went back to 1992.

Rylov ended the U.S. winning streak with his two golds in Tokyo. Murphy settled for a bronze and silver this time.

She won the women’s 200-meter breaststroke with a time of 2 minutes, 18.95 seconds, breaking the mark of 2:19.11 set by Denmark’s Rikke Moller Pedersen at the 2013 world championships in Barcelona.

The United States claimed the other two medals. Lilly King set a blistering pace early in the race and held on for a silver in 2:19.92. Annie Lazor grabbed bronze in 2:20.84.

It was the third world record at the Tokyo Aquatics Centre, with the first two coming in women’s relays.

Caeleb Dressel has set another Olympic record in the semifinals of the 100-meter butterfly.

Minutes after Hungary’s Kristof Milak took down the mark in the first semifinal heat, Dressel went even faster with a time of 49.71 seconds in the second heat.

It was the third-fastest time in history and left Milak as the second-fastest qualifier at 50.31.

In the preliminaries, Dressel tied the former Olympic record of 50.39 set by Singapore’s Jospeh Schooling to win gold at the 2016 Rio Games.

Dressel will be a big favorite in Saturday morning’s final, though he could get pushed by Milak. The Hungarian already won the 200 fly with a dominating victory.

New Zealand held off a late charge from Germany over the final 250 meters to win the men’s eight in the final rowing event of the Tokyo Games.

The Kiwi boat beat the Germans by 0.96 seconds. It was the second rowing gold of the day for New Zealand after Emma Twigg won the women’s single sculls.

Great Britain rallied late to take bronze in the men’s eight. The U.S. finished fourth, leaving American rowers without a medal in Tokyo.

Paula Reto of South Africa has tested positive for COVID-19 and won’t play at the Olympic women’s golf competition next week at Kasumigaseki Country Club. She had not yet left for Tokyo.

She is the first female golfer with a positive test. The men’s competition lost Jon Rahm and Bryson DeChambeau to positive test results.

Reto has been replaced in the 60-player field by Diksha Dagar of India. Women’s golf starts on Wednesday.

Canada has won the rowing women’s eight gold medal. They stormed to an early lead, then held off New Zealand over the final 200 meters to win.

The victory ended American dominance in the event. The U.S. had won three consecutive Olympic gold medals but fell to fourth at the Sea Forest Waterway. The Americans were dropped by the leaders early and were never in medal position for the entire race.

The start of the BMX racing semifinals and finals at the Tokyo Games is being delayed by rain.

Racing was supposed to start at 10 a.m. local time with the men’s semifinals, but track officials said it will be at least 10:45 before riders get on the track.

Greece’s Stefanos Ntouskos made a strong closing burst over the the final 250 meters to win the men’s single sculls at the Sea Forest Waterway.

Ntouskas led early only to see Norway’s Kjetil Borch begin to close the gap with 500 meters to go. Ntouskas then found the late power to pull away and build a lead as large as a boat length down the stretch.

Americans April Ross and Alix Klineman have moved on to the Olympic beach volleyball knockout round after having just a little bit of trouble against the Netherlands.

Starting in a drizzle and finishing in a downpour, the No. 2 seeded Americans lost the opening set of the match 22-20. It was the first set they have lost in the Tokyo Games. They trailed 12-9 in the second before scoring four straight points and seven of the next eight to take it 21-17.

In the tiebreaking set, they pulled away to beat the winless Dutch pair of Sanne Keizer and Madelein Meppelink 15-5.

The victory gave the four U.S. beach volleyball teams — two men’s and two women’s — a 9-1 record in these Olympics. Jake Gibb and Tri Bourne (2-0) play their final match of the round robin on Friday night. Sarah Sponcil and Kelly Claes (2-0) finish up against Brazil on Saturday morning. Phil Dalhausser and Nick Lucena are good for at least one more match after finishing the preliminary round 2-1.

New Zealand’s Emma Twigg has won gold in the women’s single sculls at the Tokyo Games. She bolted to an early lead, then finished with a surge over the final 500 meters to dominate.

Twigg had finished fourth in the previous two Olympics but easily shrugged off Russia’s Hanna Prakatsen, who won silver at the Sea Forest Waterway.