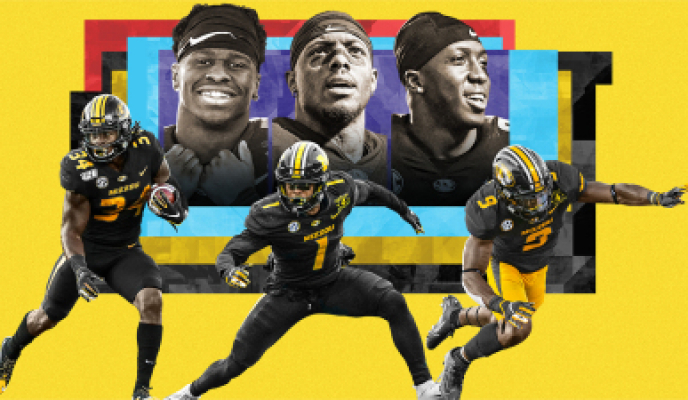 Of all the major-conference programs sending multiple players into the NFL this week, there may be none as unique as a trio coming out of the University of Missouri.

Tigers Josh Bledsoe, Tyree Gillespie and Larry Rountree III are all seniors, entering during the recruiting class of 2017, and have been close friends since freshman year. They all chose to pass up an extra year of eligibility and head into the NFL together. They all have solid chances to have their names called by the end of the draft. They were all selected to the Senior Bowl in Mobile, Alabama.

And they all are members of Missouri’s chapter of Omega Psi Phi – one of the historically prestigious nine Black fraternities and sororities, and one that’s well-represented across pro and college sports. They joined together, in March 2020, at the dawn of the pandemic.
Bledsoe, Gillespie and Rountree are brothers in every sense except blood. Even before they became fraternity members, they cemented their friendship as recruiting targets. Bledsoe and Gillespie played the same position and were recruited by the same assistant, and Gillespie and Rountree were roommates as freshmen. The differences in their personalities – Gillespie is quiet and reserved, Rountree extroverted and outgoing, Bledsoe a blend of the two – come off as balance rather than clash.

Joining Omega Psi Phi took it to another level.
But as strong as their friendship was before becoming Ques, they arrived there from different directions, citing different influences and without knowing the others had the same plan.

“We would talk about it and stuff like that, but that was it,” said Rountree, a running back from Raleigh, North Carolina, who said he had drawn influence from older Ques he’d grown up around. “We all know – all of our LBs [line brothers] – we all know we uphold the four cardinal principles, and that’s one thing that we really, really, really take serious in the fraternity. And we knew right then and there that we’d been doing that our whole lives.” 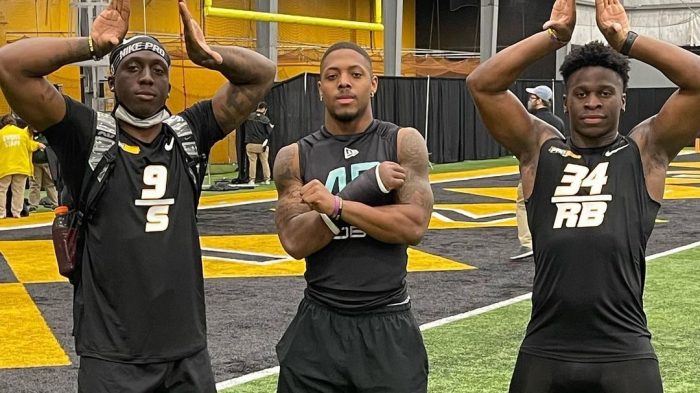 Gillespie, of Ocala, Florida, the other safety and the starter with Bledsoe their last two seasons, had family members in fraternities and sororities, and he decided as his college years evolved, “being an Omega man was my mentality.”

They’ve all come to know who the prominent Omegas are in sports, such as Michael Jordan and Shaquille O’Neal in the NBA, and in the NFL, Hall of Famer Ray Lewis, Philadelphia Eagles quarterback Jalen Hurts and current New Orleans Saint and longtime Eagles player Malcolm Jenkins. All are well-known for hopping and flashing the hooks to show their pride in their fraternity.

Omega Psi Phi, one of the Black Greek-letter organizations known as the Divine Nine, was founded at Howard University in 1911 by three undergraduates and their faculty adviser, biology professor Ernest Just. Today, it has more than 700 chapters in the United States and internationally, according to its website. Their purple and gold colors are instantly recognizable and all three players wore their gear for their interview with The Undefeated.

The COVID-19 pandemic, of course, disrupted life on campus and in the football program. Among many examples, the chapter’s probate was online, as were their community activities.

When George Floyd’s killing by Minneapolis police kicked the Black Lives Matter movement into a higher gear, the Missouri chapter and its new members helped organize marches and protests in the area.

The influence of Jenkins and his activism through the Players Coalition and elsewhere, they said, reflects well on the Ques in the league and what is possible for them.

“Malcolm Jenkins, much respect,” Rountree said. “He has been a man on a mission right now as far as when it comes to social injustice. So, big, big ‘roo’ to my man, to my brother. Just to see those things, it makes us want to do more outside in the community.”

On the field, the first year for new coach Eliah Drinkwitz, Bledsoe, Gillespie and Rountree navigated a chaotic season. The Tigers had four schedule changes in October alone due to COVID-19 outbreaks on other teams, plus a postponement because of a hurricane. Their trip to the Music City Bowl in Nashville, Tennessee, was canceled due to the pandemic. They finished 5-5, including a win over defending national champion LSU that was saved by a Bledsoe pass breakup on the goal line in the final seconds.

It was a roller-coaster final year … and going through it with his two closest friends and now Omega Psi Phi line brothers, Bledsoe said, “made it easy.”

“I know I can lean on my brothers whenever I need to. When things get tough, I know they’re there for me, regardless,” he said.

“The season I had with my LBs was … I was like, I had the most fun this year, scoring, and I’m coming back to the sidelines, and I see Bled and Ree over there,” added Rountree with a smile. “We’re over there turning up on the sideline before the game, brothers being out. It was great.”

Rountree also enjoyed that even besides him, Bledsoe and Gillespie, there were enough brothers from previous years on the roster last season that even Drinkwitz noticed.
“Coach Drink was like, ‘Man, your fraternity’s taking over,’ ” he said with a chuckle. “I was like, ‘Coach, we’re everywhere, man. What’d you expect?’ ”

The play of the Bledsoe-Gillespie tandem, and Rountree’s 972 rushing yards and 14 touchdowns (he was named second-team all-SEC and finished his career second on the all-time school rushing list, behind former NFL quarterback Brad Smith), earned the trio the coveted Senior Bowl invitation, always a serious indicator of NFL interest.

Again, their bond was tested through a bout with adversity. After a week of solid workouts that appeared to validate their invitations, Bledsoe landed badly in the game while breaking up a pass and broke his right wrist. It eventually kept him from working out at both Missouri pro days.

Gillespie’s first instinct, he said, was to react as John Witherspoon’s character did in a memorable scene from the film Next Friday: Drop everything, Craig’s in trouble, come quick. “I just felt like … get over there to my boy as soon as possible and see what’s wrong with him.”

Rountree, who was on the sideline with the offense, had the same reaction when he realized Bledsoe was injured.

“Just to have a brother there to support you,” Bledsoe said, “rather than just a friend or somebody, but actually somebody who you know really cares about you, that really, really cares about your well-being and just having them there, just made it easier for me to be able to handle the situation.”

That same bond was on display two weeks later, when a devastating ice storm struck Texas while Rountree and Bledsoe were in Frisco for pre-draft training sessions. Bledsoe lost power where he was staying, and Rountree immediately told him to come stay with him – which Bledsoe did, driving through what Rountree joked was “Alaska weather” to get there.

They dealt with suboptimal nutritional conditions – with grocery stores out of food and restaurants closed, they ate gas station wings for two days.

“It was just bad,” Bledsoe said. “But, I mean, me and him, we had each other out there.” The missing piece, Gillespie, was in Florida, taunting them on FaceTime about his ideal weather. “I chose wisely,” Gillespie cracked.

Their pre-draft adventure will end soon, with most projections putting all three in the mix for Day 3, the fourth through seventh rounds. Creeping into the third round isn’t out of the question. While Bledsoe has to see if his wrist will hurt his stock, Gillespie was boosted by a 4.38-second 40-yard dash at pro day, and Rountree is in the top 10 of most running back prospect lists, including ESPN’s and NFL.com’s.

They will each watch the proceedings from their respective hometowns. They hope a couple of them will end up on the same team – or, best-case scenario, all three on one team, continuing what began four years ago. Wherever they land, though, the fraternity bond will be unbroken.

“When we finally joined, we talked like, ‘I didn’t really know you wanted to be in this organization. I didn’t know,’ ” Rountree said. “So it was great timing by God. We’re blessed that we joined together. We came in together, joined together. It’s just crazy. Went to the Senior Bowl. Got invited to the combine together.

“I think it was just meant to be.”