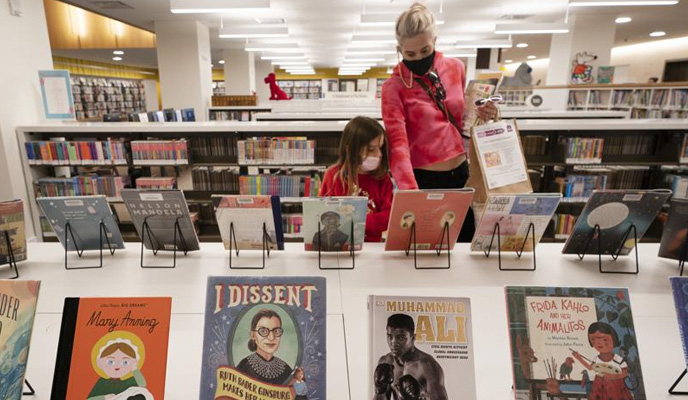 MELBOURNE, Australia — A pandemic lockdown in Australia’s second largest city will be extended for a second week due to concerns over a growing cluster of coronavirus infections.

Victoria state acting Premier James Merlino on Wednesday confirmed that Melbourne will remain in lockdown for seven more days from Friday, but pandemic restrictions will be eased elsewhere in the state.

Merlino says that “if we let this thing run its course, it will explode.”

down is the fourth for Melbourne, which has 5 million residents.

MORE ON THE VIRUS OUTBREAK:

HERE’S WHAT ELSE IS HAPPENING:

MEXICO CITY — Mexico says a clinical review of past deaths has led officials to raise the country’s confirmed COVID-19 death toll by 4,272, to a total of 227,840.

The adjustment announced Tuesday is largely one of record keeping, because even government officials acknowledge the true death toll is far higher.

Because the country of 126 million people does so little testing, many Mexicans have died at home or never got a test. So the government searches death certificates for mentions of symptoms related to COVID-19.

Those analyses of excess deaths related to COVID-19 now stand at over 348,750, which gives Mexico one of the highest per capita rates in the world.

JUNEAU, Alaska — Alaska has begun offering coronavirus vaccinations at airports in a move that had been expected for the start of the summer travel season.

The state health department said that as of Tuesday, vaccine eligibility has been expanded to include anyone in Alaska who is at least 12 years old, including visitors from other states or countries. Prior eligibility was for those who live or work in Alaska.

Vaccines will be offered outside the areas secured by the federal Transportation Security Administration at airports in Anchorage, Fairbanks and Juneau.

The health department says plans call for the Ted Stevens Anchorage International Airport to have available all three vaccines authorized for emergency use in the U.S., including the one-dose Johnson & Johnson vaccine.

INDIANAPOLIS — Indiana University modified its COVID-19 vaccination requirement, making it optional that students and employees provide proof of getting the shots as school officials changed a policy that had drawn protests from many state officials.

Indiana University said that under the revised requirement students and employees would be able to attest to their vaccination without having to provide immunization documentation as was required under the previous policy announced May 21.

The university also said a form would be available Wednesday for those requesting exemptions from the vaccine requirement for medical or religious reasons.

President Michael McRobbie said in a statement that the university’s primary concern has been ensuring the health and safety of its students and staff.

He added: “This requirement will make a ‘return to normal’ a reality for the fall semester.”

The changes come after the state attorney general issued last week a non-binding opinion that the policy was illegal under a new state law banning the state or local governments from requiring vaccine passports.

TORONTO — Canada’s National Advisory Committee on Immunization says people who got the Oxford-AstraZeneca vaccine for the first dose can be offered either Pfizer-BioNTech or Moderna for the second.

The advice affects more than two million Canadians who received the Oxford-AstraZeneca vaccine before provinces stopped using it for first doses last month. The vaccine is potentially linked to a rare but serious blood clotting syndrome. In Canada, 41 confirmed or suspected cases of vaccine-induced thrombotic thrombocytopenia have been diagnosed and five people have died.

NACI’s published report says AstraZeneca recipients can be offered the same vaccine if they want it, or can be given either Pfizer or Moderna. They say they are basing their advice on the risk of VITT, and emerging evidence that mixing and matching different types of vaccines is not only safe but may produce a better immune response.

The guidance is not binding but most provincial governments have indicated they were waiting for the information before setting their policies for second doses.

NEW YORK — Health researchers estimate that during the early months of the U.S. COVID-19 epidemic, 7,000 to 10,000 more kidney disease patients died than normally would.

The Centers for Disease Control and Prevention published the report Tuesday.

The researchers focused on about 800,000 patients who early last year had kidney failure. About 60,000 of them died between the beginning of February and the end of August last year.

The researchers compared those numbers to trends in the same patient population during other recent years, and concluded such deaths had risen by as much as 10,000. Patterns of where the patients died were similar to maps of where COVID-19 hit the United States in the first months of the pandemic. But the authors say more research is needed to determine what drove the increase – whether it was due to coronavirus infections, difficulty accessing medical care or other reasons.

The U.S. Transportation Security Administration said about 1.96 million people passed through U.S. airport security checkpoints on Friday, and 1.90 million did so on Monday. Tuesday was also expected to be busy, as travelers returned home after the Memorial Day weekend.

Analysts expect travel to continue rising slowly now that many Americans are vaccinated against COVID-19 and airlines are adding more flights.

LONDON — London’s Heathrow Airport has reopened a terminal that was mothballed during the coronavirus pandemic to handle passengers now arriving from high-risk countries. Critics say the action should have been taken sooner.

Britain has barred travelers from a “red list” of 43 coronavirus hotspots including India, Brazil and Turkey. U.K. nationals and residents returning from those countries face a mandatory 10-day quarantine in a hotel. Other travelers coming from “amber list” countries like the United States can do their mandatory 10-day quarantine at home in the U.K.

Critics have complained that red list passengers have been using the same massive airport arrivals hall as travelers from other destinations, though in separate lines, since the hotel quarantines were introduced in February.

Starting Tuesday, red list arrivals will pass through the airport’s Terminal 3, which was closed in April 2020 as international air travel plummeted.

CAMBRIDGE, Mass. — American pharmaceutical company Moderna says it has begun the process to win full U.S. regulatory approval for the use of its COVID-19 vaccine in adults.

Moderna announced it has begun a “rolling submission” to the Food and Drug Administration of data from its studies of the two-dose vaccine.

Moderna’s vaccine already has been cleared for emergency use by the FDA and regulators in numerous other countries. So far, more than 124 million doses have been administered in the United States.

Large-scale studies of the shots continued after Moderna’s emergency authorization. The FDA will scrutinize the information to see if the vaccine meets stringent criteria for full licensure.

Last week, Moderna also announced that its vaccine appears safe and effective in kids as young as 12. The company plans to seek emergency authorization for teen use this month.

GENEVA — The World Health Organization has issued an emergency use listing for the COVID-19 vaccine made by Sinovac in adults aged 18 and over, the second such authorization it has granted to a Chinese company.

The U.N. health agency said on Tuesday that data submitted to its experts showed that two doses of the vaccine prevented people from getting symptoms of COVID-19 in about half of those who got the vaccine. WHO said there were few older adults enrolled in the research, so it could not estimate how effective the vaccine was in people over age 60.

WHO’s authorization means the vaccine can be bought by donors and other U.N. agencies for use in poorer countries, including in the U.N.-backed initiative to distribute COVID-19 vaccines globally known as COVAX.

Last month, WHO gave the green light to the COVID-19 vaccine made by Sinopharm. It has also licensed vaccines developed by Pfizer-BioNTech, Johnson & Johnson, Moderna Inc and AstraZeneca.

The COVAX effort has been slowed considerably after its biggest supplier in India said it would not be able to provide any more vaccines until the end of the year.

To date, there is no confirmed deal for Sinovac doses with COVAX.

ALGIERS, Algeria — Algeria partially reopened its skies to flights after a 14-month shutdown to try to keep out the coronavirus.

A first flight of the national carrier Air Algerie took off for Paris on Tuesday and another was expected to land in Algiers, the capital.

Great caution governed the reopening, with limited flights, tests for COVID-19 and a required quarantine. Those heading to Algiers must have a negative test less than 36 hours before boarding, and all passengers must undergo a five-day quarantine in a hotel requisitioned by the state.

A negative test result is required to leave the hotel.

LONDON — Britain’s government said no new coronavirus deaths were reported Tuesday, the first time this has happened since July 2020.

The positive news came amid concern about increasing cases in the U.K. of the coronavirus variant first identified in India, and uncertainty about whether authorities will press ahead with the final stages of easing social restrictions later this month.

As of Tuesday there have been a further 3,165 confirmed COVID-19 cases in the U.K., compared to about 2,500 cases last week. Some parts of northwestern England have seen a steep rise in infections. Officials have said that up to three-quarters of these new cases are the Indian variant, which they say appear to be more transmissible.

Official figures showed no deaths within 28 days of testing positive for the coronavirus were reported Tuesday. The U.K. total death toll stood at 127,782, the highest in Europe.

GENEVA — The European Medicines Agency said it has recommended approving two additional manufacturing and finishing sites for the coronavirus vaccine made by Pfizer and BioNTech.

The EU drug regulator said in a statement on Tuesday that the additional vaccine production and filling sites were at Pfizer’s factory in Puurs, Belgium. The EMA said its decision, based on a review of manufacturing data submitted by BioNTech, is expected to have “a significant and immediate impact” on the supply of the vaccine for the 27 countries in the EU made by Pfizer and BioNTech.

Last month, the EU Commission signed a third contract with Pfizer-BioNTech to obtain an additional 1.8 billion doses of their vaccine from 2021 to 2023. That contract stipulated that vaccine production be based in the EU and that delivery to the EU be guaranteed in 2022. In April, the EU sued AstraZeneca for its failure to deliver on the hundreds of millions of doses Europe had been promised in its contract.

NEW YORK — A play about young Black men trapped on a street corner has positioned itself as the first Broadway show audiences can watch live when the Great White Way restarts.

Antoinette Chinonye Nwandu’s “Pass Over” will begin performances Aug. 4 at the August Wilson Theatre, several weeks before any other show.

Riffing of “Waiting for Godot,” the play is seemingly perfect for a post-COVID-19 Broadway: Just three actors and an intermission-less 85-minute running time.

The play was first staged in 2017 in Chicago and was filmed by Spike Lee. It was most recently produced at Lincoln Center’s off-Broadway theater in 2018 and that cast will make the leap to Broadway. 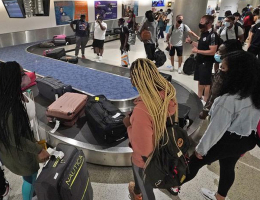 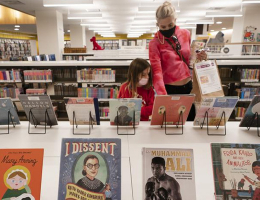 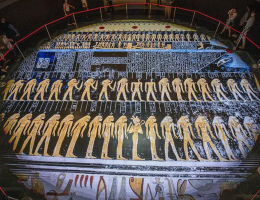 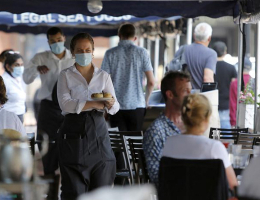 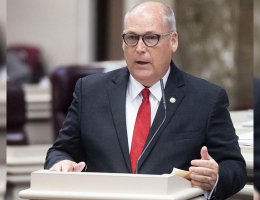