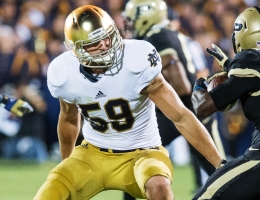 "It was pretty cool," senior linebacker Jack Kiser said. "Him being a Notre Dame parent, the first thing he said was, 'Thank your parents.' But then he just talked about 'Live in the moment. Don’t take this for granted. So, just enjoy every day, and the dog days of camp are not too bad.' "

The elder Bon Jovi, who turned 60 in March, is coming off a 15-date whirlwind concert tour in April. According to Kiser, the 2018 rock hall inductee reminded the Irish that they "will never be around a group of 100 and some guys that we consider our brothers, our closest friends."

The younger Bongiovi, who ran downfield for one snap in kickoff coverage against Nevada (2016) during his college career, also spoke to the team.

"He just echoed what his dad said," Kiser said. "He spoke from a personal experience. He’s still best friends with (director of player development) Hunter Bivin and some of the guys on (those teams). He was in Bivin’s wedding last year."

Bon Jovi, whose Philadelphia Soul won the Arena league title in 2008, was part of an ownership group that made an unsuccessful bid to buy the NFL’s Buffalo Bills in 2014. He visited Notre Dame Stadium last season and was shown on the "Jumbotron" as the crowd sang along to his biggest hit, "Livin’ on a Prayer."

Kiser said more linebackers weren’t included because they were still out on the field doing extra drills.

"I guess Marist did participate, but they didn’t highlight his true singing abilities," Kiser said. "He is, by far, the best singer on the team."